Born in Salzburg, Mozart showed prodigious ability from his earliest childhood. Already competent on keyboard and violin, he composed from the age of five and performed before European royalty. At 17, Mozart was engaged as a musician at the Salzburg court, but grew restless and traveled in search of a better position. While visiting Vienna in 1781, he was dismissed from his Salzburg position. He chose to stay in the capital, where he achieved fame but little financial security. During his final years in Vienna, he composed many of his best-known symphonies, concertos, and operas, and portions of the Requiem, which was largely unfinished at the time of his early death at the age of 35. The circumstances of his early death have been much mythologized.

He composed more than 600 works, many acknowledged as pinnacles of symphonic, concertante, chamber, operatic, and choral music. He is among the most enduringly popular of classical composers, and his influence is profound on subsequent Western art music. Ludwig van Beethoven composed his own early works in the shadow of Mozart, and Joseph Haydn wrote: “posterity will not see such a talent again in 100 years”.[3] 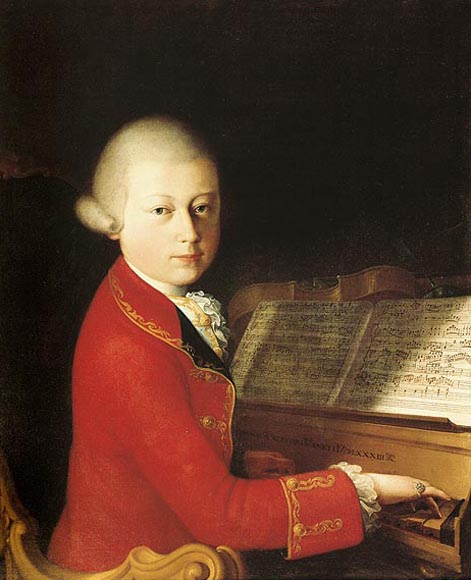 Mozart wrote his first symphony when he was eight years old. It is probable that his father transcribed most of it for him.[16]

The Mozart family on tour: Leopold, Wolfgang, and Nannerl. Watercolor by Carmontelle, ca. 1763[17]

The family trips were often difficult, and travel conditions were primitive.[18] They had to wait for invitations and reimbursement from the nobility, and they endured long, near-fatal illnesses far from home: first Leopold (London, summer 1764),[19] then both children (The Hague, autumn 1765).[20]

After one year in Salzburg, Leopold and Wolfgang set off for Italy, leaving Anna Maria and Nannerl at home. This tour lasted from December 1769 to March 1771. As with earlier journeys, Leopold wanted to display his son’s abilities as a performer and a rapidly maturing composer. Wolfgang met Josef Mysliveček and Giovanni Battista Martini in Bologna, and was accepted as a member of the famous Accademia Filarmonica. In Rome, he heard Gregorio Allegri‘s Miserere twice in performance, in the Sistine Chapel, and wrote it out from memory, thus producing the first unauthorized copy of this closely guarded property of the Vatican.[21][22]

In Milan, Mozart wrote the opera Mitridate, re di Ponto (1770), which was performed with success. This led to further opera commissions. He returned with his father twice to Milan (August–December 1771; October 1772 – March 1773) for the composition and premieres of Ascanio in Alba (1771) and Lucio Silla (1772). Leopold hoped that these visits would result in a professional appointment for his son, and indeed ruling Archduke Ferdinand contemplated hiring Mozart but owing to his mother Empress Maria Theresa‘s reluctance to employ “useless people”, the matter was dropped [23] and Leopold’s hopes were never realized.[24]

Toward the end of the final Italian journey, Mozart wrote the first of his works to be still widely performed today, the solo motet Exsultate,